A few years ago, if you asked many older Gay men, “Who was Ray Bourbon?” you might have seen a smile of recognition and be treated to a reminiscence about seeing this unique performer in one of many Gay bars or nightclubs in the years before Stonewall.

Born at the turn of the last century when psychologists were first identifying homosexuality as a condition and men and women began to see themselves as gays and lesbians, Ray Bourbon had a show business career as a comedian and female impersonator that spanned over fifty years, well into an era when gay liberation would take shape. He was perhaps the most well-known and well-traveled performer in gay venues during the last century.  But he remains largely forgotten today, his comedy both a glimpse into and a relic of another time.

Fortunately, a new generation has been steadily rediscovering Ray and his remarkable talents as albums of his material show up in used record bins. For a stage performer at his peak seventy years ago, Ray’s recordings are still compelling and powerful. His stage persona was complex and layered in many subtle ways; Ray is at once a gossipy drag queen, a bitchy diva, a butcher of sacred cows, and a keen observer of human nature. Ray would perform and record some of the same routines in the 1930’s, the ‘40’s and later in the ‘60’s; his quick patter and skills at improvisation keep the material fresh and the listener on edge.

While the recordings allow us to know Ray Bourbon the performer, Ray Bourbon the man remains elusive. Documentation on his life, culled from press releases or third-hand short biographies in show business publications, is often conflicting and lacking in detail, a situation that Ray himself encouraged during his lifetime. His memoirs, written by Ray shortly before his death in 1972, represent only a small piece of the jigsaw puzzle of his life. Much of what we can document about Ray has been unearthed by a dedicated group of researchers who all, upon hearing Ray’s routines that poked fun at everything from Hollywood to drag queens and divas to straight married life and religion, asked the question, “Who was Ray Bourbon?” The answers and theories that have emerged are both revelatory and raise even more questions.

Ray, working in everything from vaudeville, movies, Broadway, nightclubs, and even radio, constantly reinvented himself as a performer to fit the changing demands of his profession.  This process of editing and rewriting found it’s way into Ray’s everyday life. His embellishment and reworking of his own past, combined with his nomadic life, has made it difficult for researchers to pin down the “real” Ray Bourbon. While some aspects of his career – his appearances in silent films or his stage work with Mae West or Josephine Baker – can be documented to one extent or another, the line between facts and a good story are a fine one when dealing with Ray Bourbon. 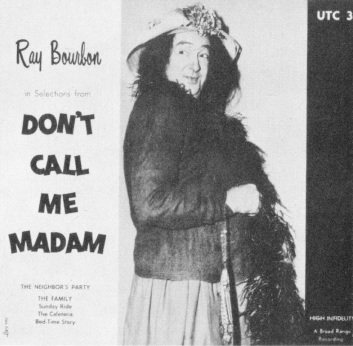 I began my own research on Ray Bourbon after picking up a couple of his albums in the mid-1990’s. At the time, I thought Ray might make an interesting topic for a documentary film; his work was both a glimpse into another era and a refreshing take on what it means to be Gay or just different in American society. I was unable to find enough visual material to pull off the documentary, but put up this web site to give my research a public outlet.

Rumors of the existence of Ray’s memoirs had circulated for years, but no one I talked with had a clear idea of what could have happened to them – various sources indicated that Ray’s possessions had been disposed of or auctioned off after his death and the manuscript, if it existed at all, remained elusive.

In June 2001, I received an email a Los Angeles resident who saw my web site. He claimed to own the manuscript for Ray’s long-lost memoirs. As Ray wrote the manuscript, a friend encouraged him with the work and agreed to help Ray find a publisher. The manuscript owner, who contacted me, had gained an interest in Ray’s story, and purchased the memoirs from Ray’s friend in 1978 with the intent of turning it into a motion picture. He arranged for an interview with Ray’s lawyer during the Blount trial, William Bell, and conducted his own research on Ray’s life. Despite interest from the William Morris agency and a draft script written by a future best-selling author, the project fell through and the manuscript was relegated to storage.  Eventually, the manuscript owner kindly turned over the manuscript to me to combine with my own research about Ray’s life.

Ray’s legacy is far subtler than his better-known contemporaries, such as Harry Hay or Allan Ginsberg. His appearances were fondly remembered by many who saw him when he toured in big and small towns all over the country, providing many isolated Gay men with a glimpse of the loose-knit urban Gay community of the pre-Stonewall era. Ray’s comedy was, at once, highbrow and lowbrow, overtly Gay and covertly subversive.

Despite his influence on Gays, he remained vague about his own sexuality. We have evidence that he had relationships with both men and women, was perhaps married, and may have fathered at least one son. In his memoirs, Ray discusses his sexual attractions and relationships to both genders, but never called himself gay or bisexual.  He worked on stage in and out of drag, and, after claiming to have a sex change operation, referred to himself publicly as “Rae” and privately in letters to friends as “Ray”.  He never referred to himself as transexual.

At the time Ray lived, we didn’t have the conversations and vocabulary to discuss variations on the spectrums of gender and sexual orientation.  Anyone who was “different” in gender or sexuality was simply “queer” – we don’t know how, exactly, Ray was “queer” in our modern understanding of sexual and gender identity.

A man of contradictions, Ray transcended simple labels. Future historians may never uncover many of the little mysteries of Ray’s personal life and career. But, through his recordings and his memoirs, we are left with many great stories to enjoy. Some may be true and others may be just a good yarn. Regardless of historical accuracy, through his many recordings, his autobiography, and memories of the people who knew him, Ray’s remarkable talent endures.