Images of Ray Bourbon are fairly hard to come by.

According to friends and people who knew him, Ray had a large collection of scrapbooks and even carried around a tape machine and used it to record or try out routines.  But, when he was arrested for murder, all his personal effects were, quite literally, tossed in a landfill.

When Ray was working on his autobiography in prison, he put out a desperate plea to friends for photos he could use in the book.  There were only around a dozen with the manuscript, several of them publicity photos that we keep seeing from other sources.

It was surprising and delightful to find some previously unknown Ray Bourbon photographs in the collection of the Los Angles Public Library.  You can see previews of the photos here – click on a photo to read the catalogue entry for the description.

The photos all come from the files of the Los Angeles Herald Examiner Photo Collection.  In addition to seeing Ray in costume for some shows, we also see pictures related to his arrest for impersonating a woman in 1956. 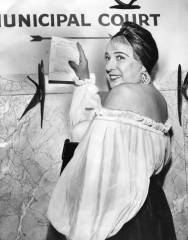 Wearing a black and white nylon dress, false eyelashes, heavy perfume and 5 o’clock shadow, Ray (or Rae) Bourbon enters Beverly Hills Municipal Court on August 1, 1956, to deny he (or she) was guilty of impersonating a woman. He produced a certificate from a Mexican doctor changing his sex. The entertainer and 14 dogs live in a Venice trailer court.

Here’s hoping some other digitized local newspaper archives turn up more images of Ray in the future.