Skip to content
randcoolcatdaddy Ray and celebrities, Ray in Europe and Asia, Research on Ray May 3, 2019January 19, 2020 4 Minutes

Ray’s incomplete autobiography, written while he was in prison, along with his letters, are really the only documents we have were Ray tells his own story.  Remarkably, as outlandish as many of the stories are, doing a little digging can usually confirm that what Ray said was true or had some basis in fact.

I noticed several years ago that Ray included an oddly specific reference in one of his routines to the Little Club in Shanghai, run by a “Mrs. Meredith”.  He even mentioned the address – 36 Bubbling Well Road.  It’s on “Oriental Opera”, from the UTC lp, Bourbon 100 Proof (UTC-5), recorded sometime in the mid 1950s.  It’s also listed as one of the places he appeared in the long list of clubs and shows on the back cover of his UTC album Around the World in 80 Ways. 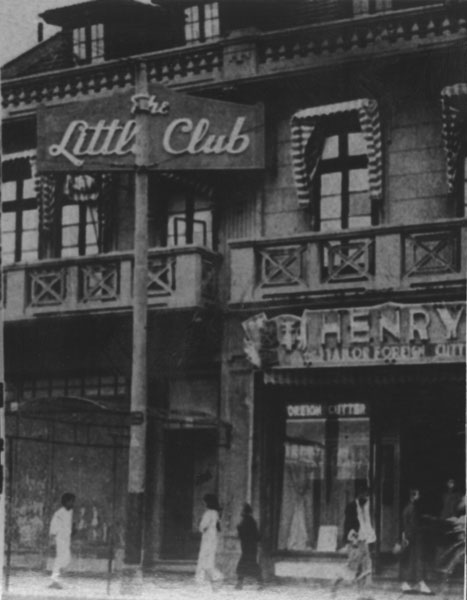 After I received the original manuscript of Ray’s autobiography, written when he was in prison in the early 70s, the reference turned up again.  This time, it was in a chapter called “Shanghai – The Little Club”.  Ray begins by talking about appearing at the Little Club in Shanghai, run by Mrs. Meredith.  He goes on to say that also owned a club in Singapore.  After his first show one night, Mrs. Meredith calls Ray aside and tells him  that a member of the Chinese royal family has requested Ray to join his party at his table in the club.

Chou Ling was one of the most gracious, thoughtful, and self-effacing people I’ve ever known. He was a great grandnephew of the Dowager Empress of China. Ling, also one of the richest men in the world, had been educated in England. He spoke English with a broad British accent and almost every other language in the world. He spoke Arabic as though he was born in a camel market in Khartoum. He lived in Shanghai in the top floor of the Cathy Hotel and had a permanent reservation for twelve people for the opening of nearly every show that opened at the Little Club.

Chou Ling invites Ray to his suite after the show.  Ray quickly takes off his makeup and changes and is led to Chou Ling’s suite by one of his servants.

He took me by the hand and we went from one lavish room to another. Each room seemed to outdo the last in magnificent decoration, gold being the predominant adornment. Then the climax: an enormous corner room. There were forty people there and they looked lost in it.

An enormous table with all gold service was at the center of the room. Every piece of table wear was solid gold – huge golden platters, over-sized golden master bowels, and types of table service that I had never seen before. Servants came and went so fast and quietly that you hardly knew they existed.

Chou Ling offers Ray a drink – pomegranate wine, served by a Mongolian bartender and they have dinner with Chou Ling’s guests.  Only he and Ray speak English – the others at the table speak Chinese and French and Chou Ling easily engages in conversation with them.

As dawn approaches, the guests leave and Chou Ling invites Ray to his bedroom.  They talk long into the night and, the next day, Chou Ling has Ray’s things moved into a room in his suite.

Ray describes being taken by Chou Ling to some type of temple complex, which Ray describes as a “walled city” with 5,000 or 6,000 people living in it.  While there, Ling attends to some kind of administrative business, as Ray is attended to by Ling’s servants.

Ray goes on to tell of encounters with the vice-consul from the American embassy, warning him about Chou Ling and appearing to shake down Ray for money with vague threats of ruining Ray’s reputation.  Ray, still living in Chou Ling’s suite, eventually asks Mrs. Meredith about the situation.  She advises Ray that both the vice-consul and Chou Ling aren’t trustworthy and that he should leave Shanghai.  And all of this happens just before the Japanese are invading the city.

I did confirm through some web resources that the Little Club and the Cathy (actually “Cathay”) Hotel did exist in Shanghai.  The Little Club was instrumental in introducing jazz to China in the 1920s and was in business through 1941.  The Cathay hotel still stands and is now the Fairmont Peace Hotel.

Classified advertisement for the Little Club from the China Press, Oct. 15, 1938, page 8.  I could find no classified ads for the club earlier than 1938, after the Japanese invasions of the city commencing with the Battle of Shanghai in 1937.

Ray mentions the episode took place around 1931.  However, the events could have taken place in 1936 or ’37 when Ray took an extended trip to Europe.

I’m presenting the information Ray gives here to see if some specialist in Chinese history might be able to comment on it.  Was there such a person as “Chou Ling”?  Does what Ray have to say sound even remotely possible?  Or was this one of Ray’s flights of fancy, taking off from his experiences actually working at the Little Club or knowing someone that did?

My thanks to Luo Zhou, Duke University Libraries Chinese Studies Librarian for her help in navigating pre-War Chinese newspapers as I researched this post.