One of the more unusual credits hawked by Ray that always seemed odd – and implausible – to me was included in photographer and filmmaker Avery Willard’s 1971 book, Female Impersonation.  According to Willard, Ray, billed as “Ramon Icarez”, performed a fire dance at the opening of the Los Angeles Coliseum.

The four-age bio in Willard’s book, accompanying photographs of Ray, sounds like it was probably written by Ray himself.  On page 75, is the reference to the LA Coliseum opening.

“In 1923, and using his real name Ramon Icarez (although there is a most interesting tale about THAT, too!), he performed a breath-taking fire dance at the opening of the Los Angeles Coliseum, which stole the show from such as the Theodore Kosloff Dancers, May McAvoy and Dick Strange, who were also on the bill.”

I had put off trying to dig into this claim for some time, since it seemed like some joke or just an outrageous story told by Ray.

But, just like most every other claim by Ray I’ve investigated, it appears this one is true.  And researching it opened up some new information on Ray’s movie work in the 1920s.

The groundbreaking ceremonies for the Los Angeles Coliseum were in 1919 and the Coliseum was officially opened in 1923.  At that time, Ray was working at Paramount.

I’ve verified through several sources that Ray was using the name “Ramon Icarez” for his film work during this period.  In a September 1923 issue of Scenario magazine, Ray is pictured with a short bio, hyping that he had sold a script for a short comedy called “Movie Mad”. 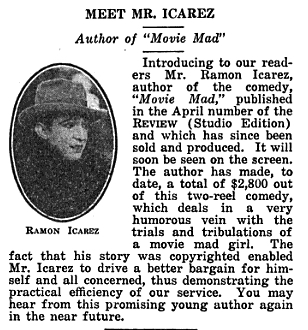 Articles in the movie trades Camera! And The Film Daily from February 1923 note that Ramon Icarez had finished shooting “Movie Mad” at Court Studios and was starting work on a followup, “Broadway Mose”, a parody of the 1922 film Broadway Rose.  The articles indicate that these were the first of six pictures in the series Icarez were to appear in for the studio. 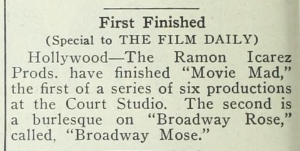 Credits for Ramon Icarez were also touted in Camera! in October 1922.

“Ramon Icarez, who had parts in “To Have and To Hold,” “Blood and Sand,” “The Young Rajah”, and “The Power of Love” was featured with the Folies Bergère in Paris in 1914.  He specializes in dancing parts.”

All of these films were Paramount productions and Ray mentioned some of them, such as Blood and Sand and Beyond the Rocks in his trial testimony in the late 1960s.

Ray appeared in Cecil B. DeMille’s original silent version of The Ten Commandments made for Paramount – it was filming in the summer of 1923, about the time of the opening of the LA Coliseum.  As production wrapped up on The Ten Commandments in late August, Ray notes in his memoirs that he was involved in a wild party that got him and other members of the cast fired from Paramount.  This is what prompted Ray to form a partnership with Bert Sherry and seek work on the vaudeville circuit.

The Opening of the LA Coliseum

One of the films that Ray appeared in at the time, To Have and Hold, mentioned in Camera! in October 1922, featured actor Theodore Kosloff.

Theodore Kosloff was a famous Russian ballet dancer and choreographer.  In the 1920s, Kosloff was working at Paramount as a featured player, usually second or third billed along such actresses such as Gloria Swanson, Bebe Danies, and Nita Naldi.  Most of Kosloff’s roles were in films directed by Cecil B. DeMille.  The studio was trying to promote Kosloff as an exotic “Latin Lover” type. 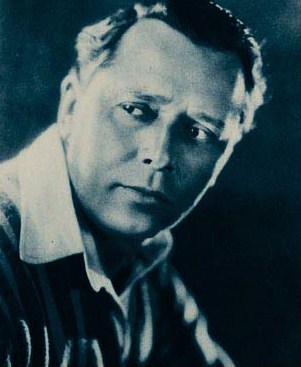 In the summer of 1923, when DeMille’s The Ten Commandments was being filmed, Kosloff was called on to stage a series of dance performances and tableaux as part of the Monroe Doctrine Centennial and Motion Picture Exposition in Los Angeles that opened the Los Angeles Coliseum.  The performances, billed as the American Historical Revue and Motion Picture Exposition, opened Monday, July 2nd and ran for five weeks, through August 4th.

“To date, more than $1,000,000 has ben expended to insure the success of the enterprise, and exhibits from practically every section of the state have found places in the “Aztec City” that has spring up a Exposition Park grounds.

The greatest of interest is being shown this memorable celebration because the motion picture world has joined hands toward making it the success that it promises to be.  All notable film starts of Hollywood, Los Angeles, Universal City and Culver City will spend alltted time at the exposition and give the populace “a first-and glance” at them.  Filmdom’s own presentation, “The Location,” showing the birth, growth and present stage of the industry, will be one of the outstanding features of the Exposition.”

The article goes on:

“Chief among scores of entertainment features will be the tableaux and pageants stages under the supervision of the World Amusement Service association and the tremendous fireworks spectacles to be produced by Thearle-Duffield company.

Another United Press piece, “500 Persons and Tons of Fireworks Required to Produce “Montezuma” at the American Historical Revue”, from the San Pedro Daily Pilot, June 23, 1923, page 4, goes into more detail:

“The first tableaux will depict the primitive life of the American Indian before Columbus and conclude with some recent history-making event.  Kosloff’s ballets will portray the “Fall of the Aztecs,” “An Easter Night in Russia,” and a “Ballet of World’s nations,” showing characteristic dances.

The most spectacular feature of the Exposition, will be the picturizaiton of “Montezuma, or the Fall of the Aztecs.”  More than 500 persons and tons of fireworks will be utilized in the production of this mammoth feature, said to be the most elaborate pyrotechnic display ever produced.  It will be staged in the new Coliseum, seating 80,000 persons.”

The caption for the photograph reads:  “Aztec dance, marking the passing of the Aztec race, produced especially for the Monroe Doctrine Centennial and Motion Picture Industrial Exposition (now being held in Los Angeles), by Theodore Kosloff.  Eighty talented American girls participated in this beautiful outdoor spectacle, staged in the amphitheater of the new coliseum with seats 80,000 persons.”

The Los Angeles Herald Tribune, on July 29, 1923 showed another photo: 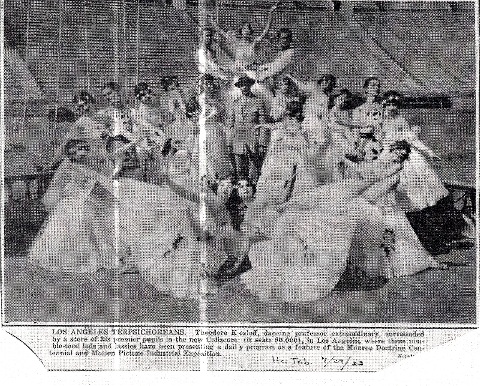 The caption for this photograph reads:  “Los Angeles TERPSICHOREANS.  Theodore Kosloff [standing, at middle], dancing professor extraordinary, surrounded by a score of his premier pupils in the new Coliseum.  (It seats 80,000) in Los Angeles, where these noble-toed lads and lassies have been presenting a daily program as a feature of the Monroe Doctrine Centennial and Motion Picture Exposition in Los Angeles.”

So, what role did Ray play in the Kosloff shows at the Coliseum?  An opening night review, “Big Show in Stadium Motion Picture Expo,” appeared on page 26 in the July 12, 1923 issues of Variety.

“The historical pageant depicting six dramatic events in American history, staged under direction of Emile De Recat, was a memorable spectacle.  First had Ramon Icarez, as Big Chief, leading a company of 50 dancers and singers, and vividly portrayed the existence in America of the Indians, with the skirmish parties and tribal ceremonies of feasting and dancing, all worthy of commendation.  The second, with Hobart Bosworth as Christopher Columbus, met with the approval of the thousands of spectators.” This credit on Ray’s resume, and the name “Ramon Icarez”, has been repeated for years from Avery Willard’s book, but didn’t seem to make any sense.  Now, in context, it fits perfectly with what we know about Ray’s work during this period.  Ramon Icarez was the name he was using in his film work at the time.  Theodore Kosloff, working along with Ray at Paramount, probably rounded up players from around the lot and other studios for the show – Hobart Bosworth, who played Christopher Columbus in the revue, starred in Paramount’s Behind the Door and Ray also appeared in that film.  Even the costumes and props were borrowed from the Paramount lot.

By the late 1960s or early 70s, when Ray made this claim, Kosloff and his involvement with the opening of the Los Angeles Coliseum would have been largely forgotten.  But, there were probably still quite a few people living at the time who attended the revues in the summer of 1923 and remembered them.  They must have been quite spectacular and certainly memorable, based on the descriptions and photos we have now.

I haven’t run into a photograph of Ray performing at the show, but perhaps one will pop up.  Sounds like Ray’s fire dance was a hit.