Some time ago, while searching for one of the aliases in Ray Bourbon’s FBI file – Richard Fabien Mann – I discovered that Ray had published a novel, Hookers, in 1932.

There was a listing for it in the Library of Congress copyright entries, showing Ray as the actual author, and a Variety article from August 23, 1932, page 40, saying the novel had just been published, that Ray’s second book, Personal Male, had just been completed, and a third, Meat Market – A Fairy Tale, was “in the typewriter”. 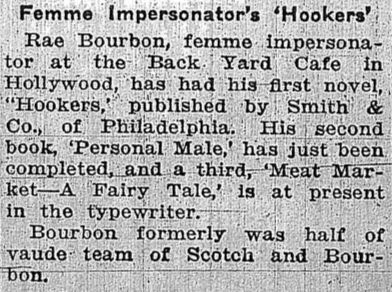 As more entertainment industry-related publications and local newspapers are digitized and indexed at archive.org, Lantern, and other databases, more information is popping up.  I recently did another search on “Richard F. Mann” and found two display ads appearing in the May 10, 1930 (page 8) and June 7, 1930  (page 4) editions of Inside Facts of Stage and Screen.

“A Lot of Laffs on Every Page
Just Off the Press

A HUMOROUS AND INTIMATE STORY OF TWO FEMALE TROUPERS

On sale at News Stands where INSIDE FACTS is sold. Or order direct from Jester Pub. Co., 405 Kress Bldg., San Francisco.

I’ve done searching in WorldCat and sites for used books such as AbeBooks and eBay, but haven’t seen a used copy for sale.  Considering it was sold at newsstands and cost just fifty cents, it was probably  an inexpensive “throw-away” paperback only released in small quantities.  (According to an article in Smithsonian Magazine, a hardback book in the 1930s cost $2.50.)

If anyone spots a copy of the book or other references to it or other books by Richard F. Mann, send me an email.